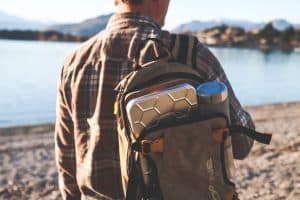 nCamp fuses a passion for being outside with a penchant for problem solving. We believe that camping gear should not be a burden, but a tool that places emphasis on the outdoor experience..

It all started with a love of the outdoors. Five years ago, Dan Cuffaro, an industrial designer and professor, began an exercise as an example for design students at the Cleveland Institute of Art. His goal was to identify a problem based on personal experience, then to explore solutions, prototype and test. He chose to focus on backpacking and campsite cooking. Cooking while camping traditionally involved bulky hardware and fuel, struggling to keep utensils clean and, most importantly, the chance of running out of fuel.

Dan’s interest shifted toward using wood from the forest as fuel because the supply is nearly endless. However, existing wood-burning camp stoves were, at the time, bulky due to the nature of a combustion chamber. He explored ways to reduce bulk and experimented with a collapsible combustion chamber. After a series of prototypes, and six rounds of  testing, Dan developed and patented a compact wood-burning stove and nCamp was born.

In 2016 Dan connected with John Cunningham, whose business savvy would move the nCamp Stove from concept to production. Together, the two realized that it seemed natural that the principles of the Stove could be applied to other camping gear. Soon, nCamp had a line of products that could work together seamlessly, but also function impeccably on their own.

Where We are Today…

Today, nCamp offers a wide range of outdoor cooking solutions, Each product is compact, weighs less than traditional counterparts and takes up less space in your pack.

Dan, John & the nCamp Team are constantly innovating and brainstorming ways to elevate your experience and lighten your load.